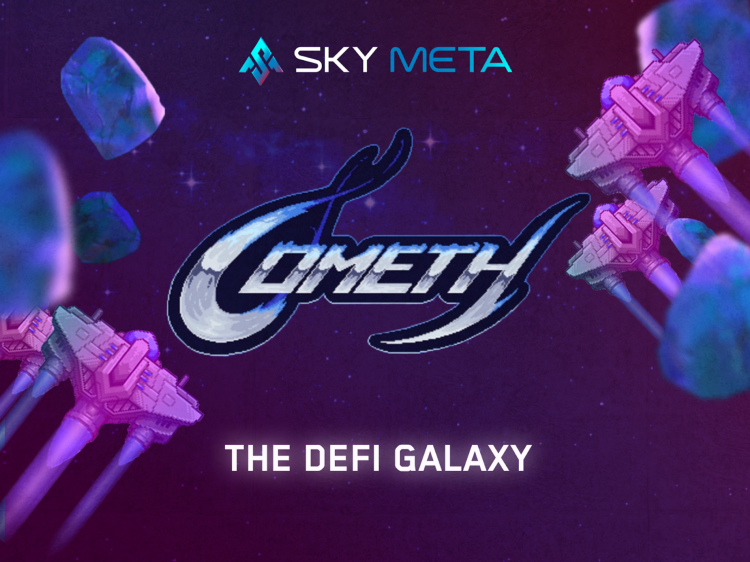 Cometh is a groundbreaking game that allows players to earn valuable tokens and craft items. Built upon the Polygon blockchain, Cometh is a strategy and exploration game that employs decentralized finance to create a sustainable and persistent ecosystem. Cometh is a game that revolves around the idea of space travel supporting classic 16-bit graphics, and bringing nostalgia into the mix. Cometh has a vast and continuously expanding universe that players can explore, hold, and conquer. Because the game uses decentralized finance services, Cometh is a fun and exciting game that could also serve as a gateway for players to be exposed to blockchain third parties.

Spaceships are the main assets of Cometh. In order to play the game, players could either buy a spaceship on their marketplace or rent one. As expected, spaceships come in the form of NFTs. Each kind of spaceship can only be minted for a limited amount. As this is the case, spaceships come in various scarcities: Common, Uncommon, Rare, and Mythic. Common being the least rare while Mythic is the rarest. Apart from the scarcity level of spaceships, they are also classified into different races and models.

Apart from the rarity and the different in-game characteristics spaceships have. They are also quite attractive. Each spaceship has a primary and secondary color that is unique to its type and manufacturer number. The color scheme that the spaceship has contextual influence with perks, consumed items, hostile spaceship, and themed quests.

Cometh Battle is a game in the Cometh universe that is free-to-play and play-to-own. Cometh Battle allows players to engage in galactic and strategic battles to be dictated by their deck. Essentially, Cometh Battle is a card game where each card on the player’s deck could attack the other ship, defend by deploying a shield, and deploy reinforcements to help win the battle.

To play Cometh Battle, new players will be provided with a free ship (mule) and a deck of cards they can use in battle. Upon winning battles, players are rewarded with resources that they hoard. These resources can be used to craft new cards.

In a Ranked game, players duel each other to achieve higher ratings and hoard resources. Similar to other games with a rating, matchmaking in the game is completely random but prioritizes matches between players with similar ratings. Rewarded games per day are limited to per day and per spaceship’s scarcity in order to maintain the fairness of the game and rewards are only given if the player wins.

Training mode is a game mode where players can play against the opponents of their choice. This game mode won’t affect the player’s rating and won’t be rewarded with resources.

Cometh Battle hosts tournaments that they call missions. Partnerships and sponsored events will be present in the game to make it more fun and exciting all year long. Each of these tournaments has a prize pool that will be divided among the top players. Tournaments make the game much more competitive and much more attractive for new players.

Cometh will come with a rental system, it is a peer-to-peer rental system that allows players to rent their NFTs to other players for their own use. The rental system of Cometh was designed with the help of other guilds in order to fit the needs of both single NFT holders and large collectors. This allows players and investors to earn from their NFTs without actually playing the game.

When renting an NFT on the rental marketplace, tenants will be able to see how many days the NFT is available to rent. Players that are quick to act will have the chance to find a great deal as some rentals even come in bundles.

$MUST is the governance token of Cometh. $MUST holders can propose changes in the parameters of the protocol, can have the ability to vote on proposals and elections of the Galactic Council, and even be elected at the Galactic Council provided that they have 1000 $MUST.