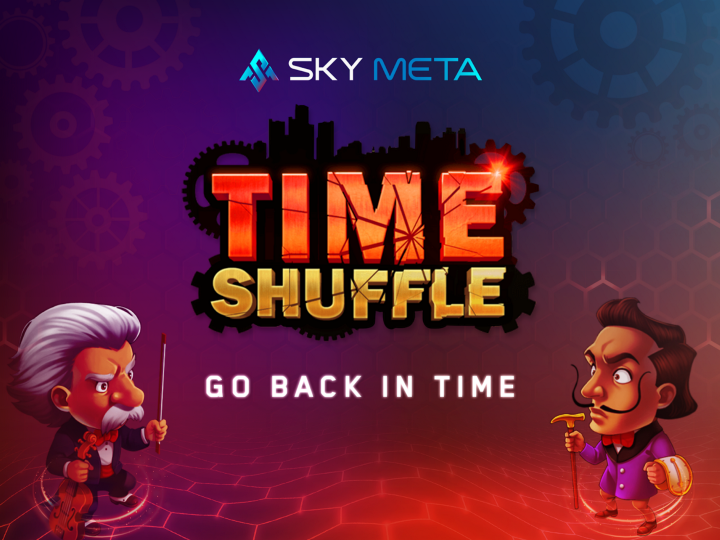 A new Web 3 RPG game has come to town and it is set to bring us a fun and exciting experience while driving us down memory lane. With the recent challenges and happenings that are surrounding the GameFi market, blockchain and game developers remain true believers in their craft and this new game is just proof of why that is. TimeShuffle is developed and founded by a team with 15 years of experience in the gaming industry.

TimeShuffle is a free Play-and-Earn RPG game that in its current version is web-based. It is developed by a team that has the primary goal of giving the players an optimum gaming experience while giving players the opportunity of earning only comes second.

With the words “fun” and “engaging” being the team’s primary focus, the game allows players to battle each other in a strategical way. It also has a rather unique approach to creating and collecting NFTs. It allows the players to merge and combine existing characters to create better and more powerful NFTs. TimeShuffle also allows players to bet on the characters that they own to get a chance of winning each other’s NFTs, taking high-stakes gameplay to entirely new levels.

TimeShuffle is a game set in the near future where time-traveling has been invented. In the future, an alien material and a quantum particle has been discovered, giving the world a new form of powerful technology. Because of this, a thirst for power from nations has caused a great war that is so massive that it wiped out the better part of the world’s population.

HEXAGON corp. is a group of scientists that is on a mission to make use of the new technology in order to bring back world peace. Their solution is a time-traveling device.

A scientist from HEXAGON corp. stole the device and shuffled everything in the past in order for him to have world dominance. Many followed his conquest to have personal gains as well. With this conflict, HEXAGON corp. needs to protect the timelines and needs to protect the current peaceful situation of Earth. Therefore, a faction called TIME KEEPERS has been formed by an elite group of time travelers in order to intercept the antagonists, otherwise known as the TIME BREAKERS.

The mechanics of the game is for you to recruit historical figures, such as Einstein, Columbus, Beethoven, Martin Luther, and the likes, allowing you to create an all-star time-traveling squad. The mission of your squad is to preserve the timeline and prevent the opposition from attaining world dominance or shuffling it in order to attain more power, depending on what faction you decide to join. Will it be the TIME KEEPERS or the TIME BREAKERS?

The historical figures are called ‘Heroes’. Each hero has a unique set of skills and stats which is crucial to the outcome of the battles that the player faces. These skills and stats can be upgraded throughout the game and the progress of the player. The player can own as many characters as he would like, but only three can be chosen to build a squad for battle or a mission. Players can rearrange or replace the characters between battles, allowing people to experiment with different strategies and keeping gameplay fresh.

TimeShuffle’s core gameplay is a turn-based strategy game) where two teams are positioned opposite of each other. The order of turns will depend on the heroes’ speed stats and could change mid-battle. Each hero will take turns depending on the order of attack, with the player choosing what action will be implemented. There are three types of action:

After a fierce fight from both players, a battle is won when one team has destroyed the team of the opposition.

In this battle type, you will battle an AI-controlled opponent that gets smarter with each win you get under your belt. There are two types of PvE battles:

As the name suggests, this game mode allows you to battle other players’ teams. Like PvE, there are also two types:

Passive — This is a PvP game mode where players can prepare a team that they will fight other players with when deployed. These battles can happen even if you’re offline since they will be operated via AI and will be based on the skills of your heroes and the advancements of the AI.

Real-Time — These battles will require your strategic skills as these battles are real-time against other players. The players can either reject, accept, or propose another type of battle when invited by another player. There are three types of real-time battles:

There are three types of NFTs available in this game:

These NFTs have two types, there are Special Heroes, which are heroes who have left a mark on the evolution of humankind, and there are Free-to-Play Heroes, which are heroes that everyone in the game will receive. Each hero is “born” with a different skill set from the others. These skills are randomly assigned by the Oracle AI from the huge skills pool. Each hero will get 5 common skills, 3 uncommon skills, and 2 rare skills. There are also Legendary skills that are extremely rare and will replace any skill from any rarity if your hero gets one.

Heroes can range from historical figures like Einstein, Gengis Khan to Martin Luther King, or any historical figure from the past. Heroes will also be assigned a profession, such as being a painter, which specializes in perception and light, or a physicist who specializes in time and gravity. There are a lot more professions that can be assigned to a specific type of hero. For example, you can have an Einstein character type and his profession could be a musician with the specialty of the mind.

A player can collect as many characters as one would like, but only three will only be needed when battling in either PvE or PvP game modes. TimeShuffle gives players the opportunity to buy and sell heroes. Players can also create a new kind of hero via DNAShuffle.

This is a feature that is unique in this game. It allows players to make stronger heroes for them to use in battle. Let’s say, for example, a player has two heroes of the same type like an Einstein Physician and an Einstein Musician. If the DNAShuffler is used with these two heroes, the player would end up having a stronger Einstein because it has combined the skills of the previous two.

Each hero type has a limited population and it will never be expanded. With the help of the DNAShuffler, each type of hero can have the possibility to be reduced to only one. This will help retain the value of the NFTs in the long run and can make them a collector’s item in the future.

These are NFTs from the game that can be collected while playing the game, buying mystery boxes, and buying them in the marketplace. The quantity of items in circulation is also controlled so that the value will be sustained. Items will be released with every seasonal update of the game. Items can be assigned to heroes and will modify some skills into a profession that is different from the hero’s current one. Some skills can only be activated when the hero is equipped with a certain item.

In order to participate in missions and battles, a player must have at least one camp. Upon registration in the game, one camp will be given to a player. Players can also buy camps from the marketplace. A player can have multiple camps but only one can be active. Camps can be upgraded and traded in the marketplace and provide heroes with multiple passive skills and stats improvement to the players’ team.

Founders Pass Holders will have the following benefits:

This is the main governance token of the game. It is a deflationary token and has a fixed supply of 350,000,000. Its main purpose is to buy the main NFT assets of the game and for governance. You can use this token when staking, farming, voting, and buying NFTs.

This is the game’s earn token and is the in-game currency. $GOLD is given as a reward after completing a mission or winning a battle. It can be used for upgrading a hero, DNAShuffle, unlocking mystery NFTs, and game discounts.

TimeShuffle is a game that is developed by an experienced team. Their experience shows, even in early versions of the game. TimeShuffle has a lot to offer its player base and has a lot of features that players will enjoy. To add to that, the game has a great storyline which will surely hook a lot of gamers. The founders and developers have set their focus on making the game fun, which is rarely found in a lot of web 3 games. The game is still in the early days of its development, and there is still lots in store from this team. TimeShuffle is a game that could succeed and possibly change the play-to-earn scene.